So here’s the thing. Until my daughter was born, I’d managed to live in total ignorance of the branding juggernaut that is Julia Donaldson. I’d vaguely heard of a creature called the Gruffalo but was wholly unprepared for walking into the books section of a certain high street stationer and finding it blanketed by her. If it wasn’t written by her, then it was illustrated by her collaborator Axel Scheffler*.

Suffice to say I’m now fully aware of the momentousness of a new Donaldson book, especially when it’s illustrated by the magnificent Helen Oxenbury**. 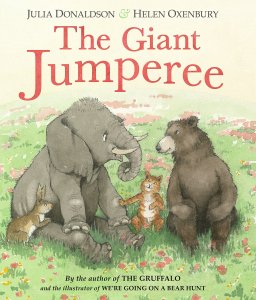 Their new book is called The Giant Jumperee and it combines plenty of classic ingredients to tell the story of what happens when Rabbit, hop-hop-hopping home one day, hears a menacing voice emanating from his burrow.

“I’m the Giant Jumperee and I’m scary as can be!” it booms.

Luckily, Rabbit knows folk. Or at least, he knows Cat and Bear and Elephant, who are all game for investigating – until they too hear the voice.

Just who or what is this Giant Jumperee lurking in the burrow’s darkness?

If you’re among the first to have bought a copy, you probably already know the story by heart… But meanwhile, I got to quiz Donaldson and Oxenbury a bit about their own reading as children. Their responses are the first in what I’m hoping will become a series in which beloved authors and illustrators reveal the books that made the biggest impression on their childhoods.

Julia Donaldson – the book that scared me:

I was scared of/fascinated by an illustration in a re-telling of Greek myths, in which a serpent is guarding the golden fleece. I think the golden fleece, which was up a tree and glinting eerily, was just as scary as the serpent. My children had exactly the same reaction to a picture of the troll in the story of The Three Billy Goats Gruff. They would cover their eyes, yet keep sneakily turning back to that page. Why do people seem to think children are so different from adults? I think we all like to be scared and then reassured – either by a happy ending or by the knowledge that it’s “just a story”.

Helen Oxenbury – the book that thrilled me:

As I grew up during the war, books were very few and far between in our household. When I was about seven, eight years old however I was given Five Go Off In A Caravan by Enid Blyton. I read it and straightaway read it again without a pause. I could not believe what wonderful adventures these five children had, trusted by their rather eccentric parents to go off on their own in a… CARAVAN. And I was with them for every wonderful moment. In time, I read all the Famous Five books, but none quite came up to the thrill of that first one.

The Giant Jumperee by Julia Donaldson, illustrated by Helen Oxenbury, is published by Puffin (hardback, £12.99).

*One of the first books I bought my little girl was from his Scheffler’s Flip-Flap series – these books are lovely. And even when children are too little to get the consequences-style joke of an anteater’s body paired with a toucan’s feet, the weight and size of the ring-bound pages make them perfect for small fingers itching to turn the pages of something a little more grown-up feeling than a board book.

**Oxenbury happens to be married to John Burningham, author and illustrator of some of my own favourite children’s books, chiefly Cannonball Simp, Mr Gumpy’s Outing and Borka. He also illustrated the first edition of Ian Fleming’s – it’s easy to forget he was the author – Chitty-Chitty-Bang-Bang.