In our home, we’re obsessed with stars and planets at the moment – and just in time for prime stargazing season, too.

I know this thanks to A Cat’s Guide to the Night Sky, one of three very different, equally – alright, I’ll say it – stellar new books for any budding astronomers in your life.

Here’s a little bit about what makes each of these dazzlers so jaw-droppingly informative.

The latest in the stunning Welcome to the Museum series, this supersize, impactful stunner features a spread that puts things so slap-bang into perspective, it’s hard to even finish typing this sentence… So let me show you instead.

Yep, that’s our beautiful, beleagured blue-green planet at the bottom of the lefthand page. Follow the lines and you’ll see how tiny even the vast local group that the Milky Way is a part of is in the bigger picture that is the Universe.

That progression – from Earth to Milk Way to Universe – is mirrored in the book’s contents, which move methodically from human attempts to see space more clearly to the solar system, galaxies and the Big Bang.

Prinja is an award-winning astrophysics professor at University College London and whether he’s talking about different galaxy types (with an estimated 2000 billion out there, astronomers have to have a way of categorising them) or theories as to how the Universe might end (the ‘Big Crunch’ is one of them), his explanations are as clear as Venus on a frosty night. It’s brought to life by Wormell’s digitally enhanced engravings, whose full-page detail evokes all the mystery and splendour of space.

Along with the very best non-fiction, this is a book that’s as full of questions as it is answers. What’s a little existential parental anxiety in the service of firing your child’s imagination?

The Skies Above My Eyes by Charlotte Guillain and Yuval Zommer (Words and Pictures, £14.99)

It’s thrilling when toddlers start asking real questions – questions like, ‘What shaped poop do deer have?’ or ‘What’s above the clouds?’ Of course, if you’re anything like me, this means it’s time to brush up your general knowledge sharpish.

The Skies Above My Eyes can certainly help with that second question. Beginning with a little girl standing on the pavement of a busy city and raising her eyes, it leads readers through all the things that are above her, from the lightning rods that top skyscrapers to helicopters, the ozone layer, weather balloons, the Karman line (the imaginary line that marks the start of space – pop that in your pocket for the next pub quiz), the International Space Station, the Moon, and beyond.

If you’re beginning to feel a bit light-headed, don’t worry – the book also brings you back down to Earth, via comets and asteroid belts, jet streams, Ruppell’s griffon vulture (the highest flying bird on the planet) and spiders that can ‘parachute’ hundreds of miles.

A simple but really clever design means that you can turn its pages like a regular book or – and this is what will wow littler ones – pull it out to stretch all of two metres across the floor. The text is easy to digest – just the right length and full of enthusiasm – and the vibrant, textured pictures really make it, drawing the eye up, up, up.

As for the deer poop…

A Cat’s Guide to the Night Sky by Stuart Atkinson and Brendan Kearney (Laurence King £14.99) 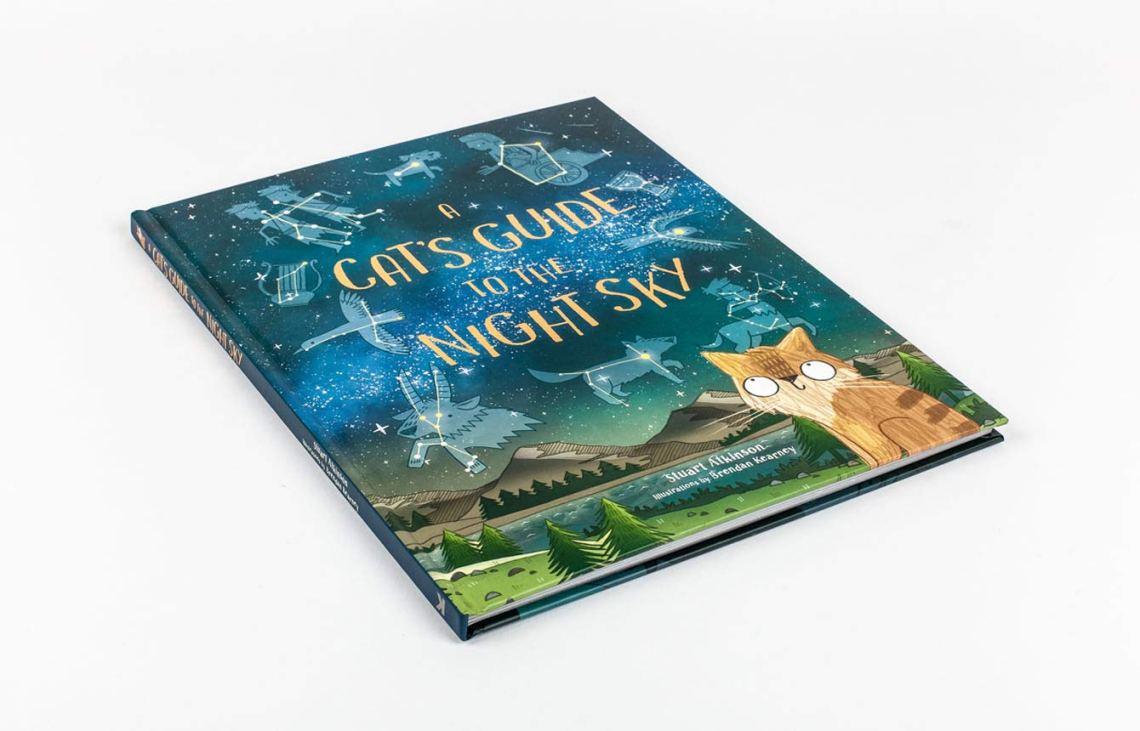 The cat in question, rather charmingly, is called Felicity, and while other felines are off prowling alleyways by the light of the moon, up to no good, she loves to watch the stars.

Felicity pops up on every page to guide curious readers through the magical hobby that is stargazing. She turns out to be a practical-minded moggy, so the first page lists everything that you’ll need for a proper expedition, including a hat, a snack, and binoculars. Oh, and a grownup.

From what you’ll see in every season (get ready to watch the Geminid shower shoot meteors out of Gemini in mid-December) to how to tell what’s a star, what’s a planet and what’s a satellite, its lively spreads pop with good-to-know details that will get children excited about the night sky.

You might not be up for hiking into the hills on a frosty night with a little one in tow, but with the nights drawing in, you can always stand on your doorstep (or drive out of town if your skies are made murky by light pollution), and spot the constellations. They’re all cleverly illustrated here like dot-to-dots, with the stories to go with.